Microsoft’s Rally Has Further to Run This Spring

Tech behemoth Microsoft (MSFT) is having a great year in 2019 – since the calendar flipped to January, shares of this mega-cap stock have surged more than 26% higher, besting the rest of the broad market by a big margin.

And shares look like they could have even further to rally this spring.

“We believe the cloud to be a secular growth trend and that upside to shares will result from Microsoft’s hybrid cloud leadership as the company grab’s market in this expanding industry. While companies may look to build out multi-cloud environments, Microsoft’s Azure offering will be a prime choice thanks to the company’s decision to provide the same “stack” used in the public cloud, to companies for their on-premise data centers” — AAP analysts.

Near-term, Microsoft is getting a shot in the arm from an unlikely source: Alibaba Group (BABA) , whose cloud service competes with Microsoft Azure, reported strong growth numbers for cloud sales, indicating that industry-wide demand continues to track higher.

That’s particularly good for Microsoft, which has made a big bet on cloud services (both in terms of licenses for its software, and a push towards providing infrastructure as a service through Azure) in recent years.

Cloud revenue growth has been a major driver of Microsoft’s price trajectory of late.

And, from a technical standpoint, that trajectory isn’t showing any signs of slowing right now. To figure out how to trade shares from here, we’re turning to the chart for a technical look: 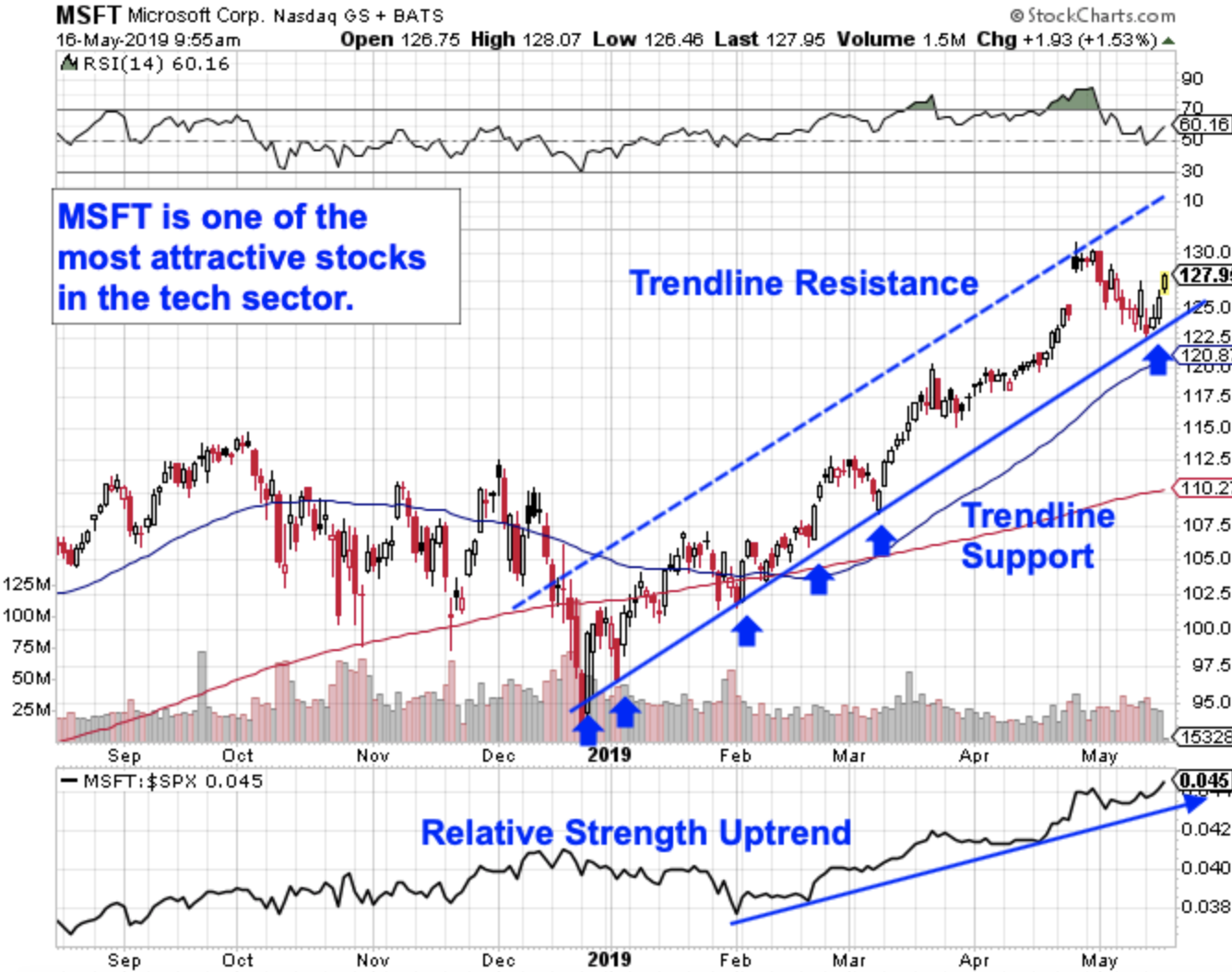 You don’t need to be a technical trading expert to decipher Microsoft’s chart here – instead, the price action is about as straightforward as it gets.

Microsoft has been bouncing its way higher in an extremely well-defined uptrending channel since the final days of December 2018. Since then, shares have managed to bounce higher on every test of trendline support along the way.

Now, as Microsoft catches a bid off of support for the fifth time this year, it makes sense to buy the bounce.

The broad market correction that kicked off at the start of this month actually had some pretty interesting trading implications for Microsoft: It brought shares from trendline resistance (and overbought territory) at the top of its price channel down to trendline support. The fact that buyers are stepping into shares in a big way here means that it makes sense to join them.

Relative strength, the side-indicator down at the bottom of the Microsoft chart, adds some extra evidence that shares look attractive here. Relative strength has been in an uptrend of its own since February, signaling that Microsoft continues to systematically outperform the broad market despite this month’s correction.

As always, risk management is key. With the 50-day moving average acting like a decent proxy for support, it looks like a reasonable level to park a protective stop below.

Meanwhile, Microsoft is the textbook example of a “buy the dips stock” right now – and a buying opportunity is taking place this week.

Beyond Meat Soars on Earnings – Here ...

Jobs are good for housing. No question. That is why some Realtors are dancing a jig around Friday’s unexpectedly high gain in the February employment report. “The strong pace of ...