Here Are 3 Hot Things to Know About Stocks Right Now

Stocks fell on Wednesday, Oct. 24, with earnings from aerospace giant Boeing Co.   failing to lift the Dow Jones Industrial Average amid an environment for investors that remains sensitive to a slowing world economy and rising volatility.

The Dow declined 605 points, or 2.4%, to 24,586, the S&P 500 fell 3.08%, and the Nasdaq slumped 4.43% as semiconductors and telecom stocks were the leading laggards.  Stocks finished in the red on Tuesday, Oct. 23, but came off sharp lows suffered earlier in the session. The blame was placed mostly on disappointing earnings, slowing growth in China and worries over trade. 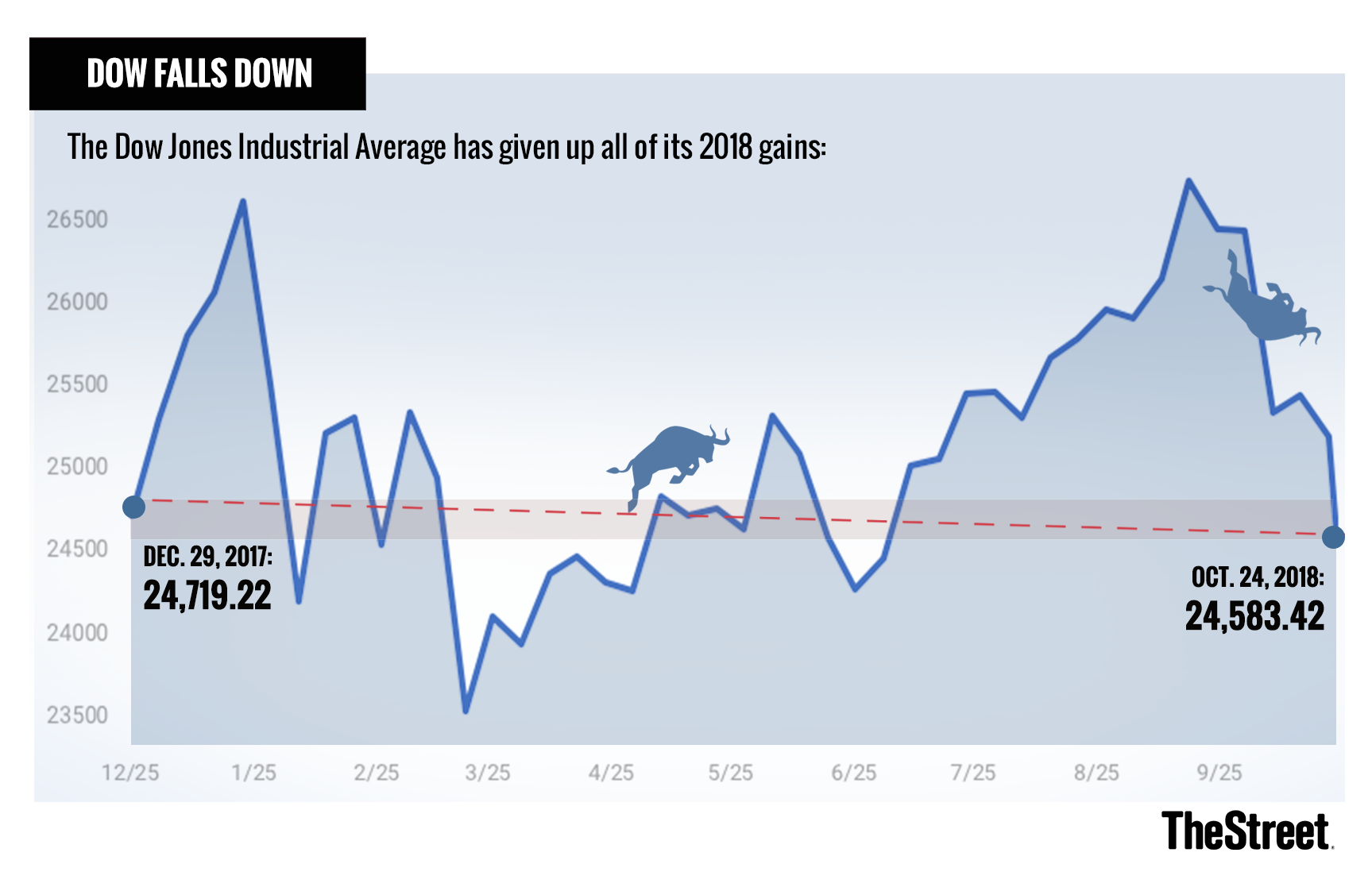 “It’s hard to get one’s arms around all of this selling and wonder at some point when it will be over. Each dip has been a trap door, as the sellers unload stocks into a torrent of selling. There is just no interest right now in owning equities,” said Robert Lang, a columnist for TheStreet’s Real Money premium site for active traders and co-manager of our Trifecta Stocks model portfolio.”

“While some may believe today’s selling was orderly, let’s not forget the VIX climbed more than 20% today and volume levels swelled. Further, new lows swamped new highs, a condition that has been nagging the markets since September. Earnings have not been all that supportive of lifting the markets, look at Boeing today. When the markets are in distribution it is time to step back, wait for the selling to finish and then review the landscape. We are not to that point yet. Cash is a good asset to own here,” Lang concluded.
Boeing Co. ( BA)  earned $3.58 a share on an adjusted basis in the third quarter, beating estimates of $3.47. Revenue of $25.15 billion topped forecasts of $23.9 billion. The third-quarter revenue growth was driven by higher defense volume and services growth, Boeing said.

AT&T Inc. (T) posted third-quarter adjusted earnings of 90 cents a share, missing estimates of 94 cents. Revenue in the quarter was $45.7 billion vs. expectations of $45.4 billion. The stock declined 8.09%.

AT&T said it had 38.8 million video subscribers at the end of the quarter, a figure that was roughly flat from the same period last year, while its North American wireless customer base grew 10.1% to 167.6 million.

Texas Instruments Inc. (TXN) tumbled 8.22% after the chipmaker posted weaker-than-expected third-quarter sales and cautioned it was heading into a “softer market” in the months ahead.

Texas Instruments said it sees revenue for the three months ended in December in the range of $3.6 billion to $3.9 billion, missing the Wall Street consensus of around $4 billion, and earnings of between $1.14 and $1.34 a share, which also were shy of the consensus forecast. The outlook followed third-quarter earnings that showed modest revenue growth of 3.4% to $4.26 billion but missed analysts’ forecasts.

The Wall Street analyst who called this ...

TOKYO (Reuters) – A string of disappointing U.S. data pinned the dollar near six-week lows against a basket of currencies on Tuesday, while Asian share markets held steady after notching ...